Looking for ideas for Bart Simpson being naughty- (ha)

I’m making a surprise 40th birthday cake for a friend- He LOVES the Simpsons- so I am making Homer lounging on the couch with a JETS jersey (another of the birthday boy’s favorites)- holding a remote and a Duff can of beer. The TV will be cake as well- withthe game (edible image I think) playing. I also wanted to add Bart – because he is such a character- and I thought I would put him behind the couch doing something naughty-

I don’t really watch the show- so does anyone have any suggestions of what Bart could be doing that would garner a chuckle when viewed?

Also, I haven’t started the characters yet- anyone know of a Simpson tutorial out there- any little bit would help- as I am a newbie-

Thank you in advance for any and all suggestions- 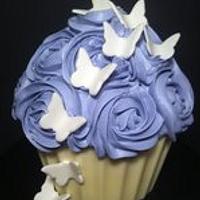 Nikki Belleperche replied about 9 years ago

Him mooning someone would be good lol. Or if that is too “naughty” lol, maybe him aiming his sling shot at Homer from over the couch. Really anything that might tick off Homer is good! He loves to mess with his dad! (don’t most kids? :P). What a fun cake! Goodluck!

Maureen replied about 9 years ago

Love both those ideas Nikki- Thanks— I think I better stick with the slingshot though- ha (although Bart “mooning” the crowd would be much funnier/cuter!!)