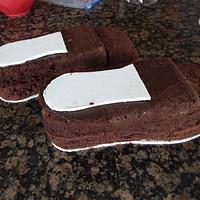 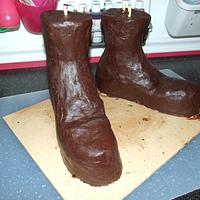 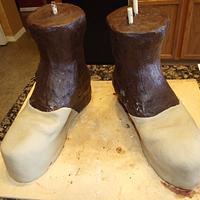 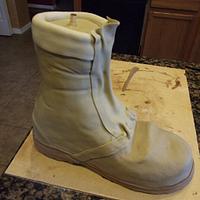 Here are a few step by step pictures to help explain the building of this cake as I have had many requests on how I did it. I hope it helps a little although every step is not pictured.
I started with outlining on some cardboard the boots my husband had first and then cut them about 1/2 an inch smaller to accomadate for the buttercream and fondant that would go on later.I then cut out some foamcore boards that would make the base of the boot so as I could stack the cakes on these first before moving them to the board. I used a 11"x 15" sheet pan and then cut out the 2 cardboard templates from that. Place them then on the foamcore bases and use bunt pans or another sheet cake for the rest of the boots. I just kept on stacking and shaping as I went and also putting foamcore in between every 2 layers of cake, I went up a total of 6 layers of cake, 2 foamcore inserts,if that gives you any idea. Make sure any cuts you make for ripples in boot or such are very pronounced as when you put buttercream and fondant on you loose a lot of it. I made somewhat templates of all the pieces of the boot as if I was sewing them together as a shoe maker. They were not precise but good enough to get them on and then cut any extra or such off. I textured each piece of fondant before it went on the cake with a piece of texturized paper from the craft store then just pressed it onto the fondant once everything was in place to take out any smooth spots I had made with my fingers. My board I had made a few days before so the fondant could harden before I placed the boots on. The boots do sit flat but I put a little dark brown fondant on the bottom between the heel and front of foot to give the illusion of being of the board,boy I hope that makes sense. So at this stage I have the boot covered only to the top of the cake, no lighter top or lacing or lacing seams. I now placed the boots on the cake and put dowels thru the cake, all the way thru the foamcore baord til it touched my counter top. It was good and stable and ready to do all the final finishing elements. A fondant top went on first to hide my dowels then I did the lighter beige tops, then lace seams, then laces. I placed paper all around the boots then gave them a quick airbrushing of color to bring out all the creases that would naturally be in a pair of worn military boots. I will say it did help having my hubbies boots sitting right in front of me so as I could see all the things that truly made these boots look so real. And they did look real the guy this cake was for came to pick the cake up and had no idea that his cake was sitting right in front of him. It was really nice to a cake done that looked this great. Hope all this helped, unfortunately not all the steps are covered but I hope it gives you the basics needed..

Thank you so much for your photos of how you made this and the explanation.. you are so slick and professional!!! I can see you are an artist… fantastic job!!! well done, those boots are the best I’ve seen!!! Love your approach and thought behind your work :)

Wow, thank you Calliicious your words mean so much to me as I feel the exact same way about you and your work. You inspire me with every cake you do and I am so blessed to get these kind of comments from people I look up to and admire so much.

wow! these are incredible boots! love them!! No wonder that guy thought they were real!! brilliant xx 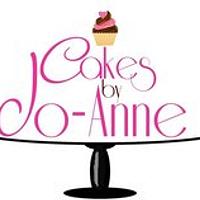 Thanks Fifi so much for your kind words. This is probably the one cake I have ever done that I was not critical of my own work. Oh except for the flag as I had the stripes to narrow which then gave me too many and as my hubby is a 20 yr service member he was not happy I got the flag wrong. Oh well I guess I will never make that mistake again,lol.

I am so pleased that you were happy with the result. I feel for you about the flag (as you are clearly a perfectionist!) but it does not in any way affect the fantastic creation! Really brilliant. Have just liked on FB too as I missed the posting of it at the time – like so many other posts I miss on FB! very annoying! well done again xx

What an amazing cake! 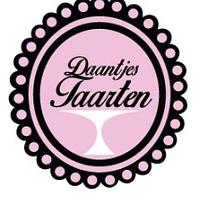 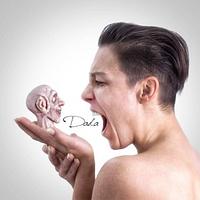 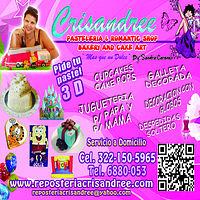