Inga at the beach

Inga in the beach (shaped feminine in fondant). The summer comes and the Spanish beaches fill with tourists. Inga, the exuberant Swedish one that seems to be extracted of Alfredo Landa’s movie. A northern epicure the one that is charmed with the... 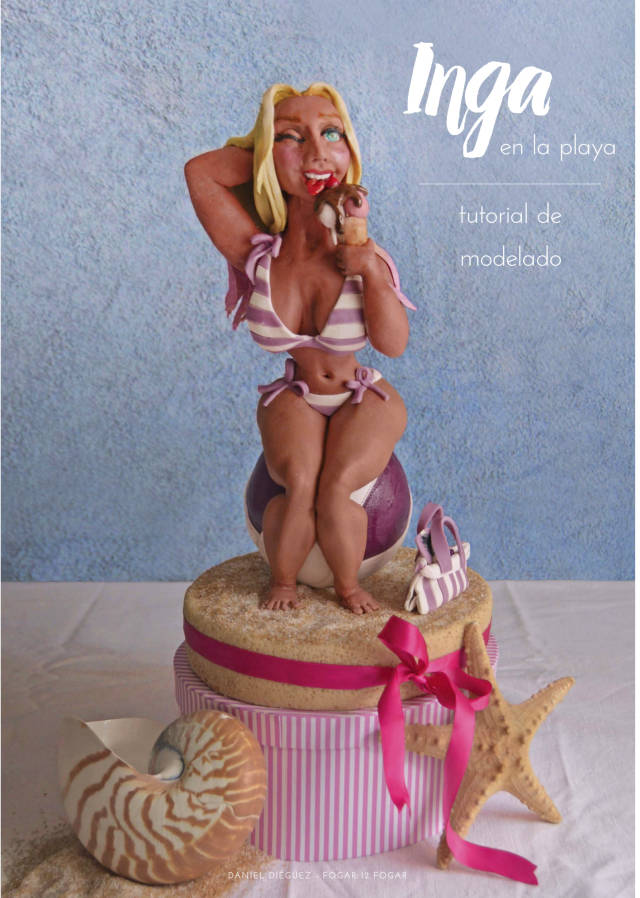 Inga in the beach (shaped feminine in fondant). The summer comes and the Spanish beaches fill with tourists. Inga, the exuberant Swedish one that seems to be extracted of Alfredo Landa’s movie. A northern epicure the one that is charmed with the sweets that make it be entradita in meats. But his prominent curves do not develop a complex her and it illuminates proudly his body scarcely covered by a minuscule bikini. This summer takes Inga’s example and enjoys the beach, of the life and of the sweets that you desire!!

We depart from a base lined with fondant color clear ocher covered with white and brown sugar mixed. On this base we place a ball of lined with dark white and lilac.

The fondant that we are going to use for the base of the figure they will be approximately 800 grams of color brown skin, I mix always the colors by the lump depending on that I have. To obtain this color the simplest thing is to depart from an orange tone and it to get dark with something of quoit, we him can add something of white if we still have it very dark. To the fondant we add a spoonful of dessert of cmc for kg in order that it should be firm. Is important to knead until the color this one integrated and the mass has the suitable plasticity. We verify the plasticity of the mass stretching it, it will have the suitable one when it could do a very thin thread and does not break. This one is the point in which the fondant this one prepared well to work.

We separate a third of the mass for the legs. We do a light doughnut ring kneading with the palms of the hands. We increase the pressure separating the fingers to generate the brands that are seen in the image while we turn the light doughnut ring of fondant on if same. In this point we double it to the half and accentuate the form of the back with an esteca of thin top. We press with the fingers in the position adapted to form the foot and separate the toes once formed with scissors. We place the legs in the correct position on the beach ball and allow that the mass should cool and stabilizes, this is important in order that it is not deformed on having continued working on it.

We puncture with a toothpick of thorn in the center of the ball and of the hips, where the torso of the figure will have to go. We coil a thick wire of flowers with a couple of returns at a height of the shoulders that it will use us as subordination for the arms. We apply eatable glue on the zone of union of the hips and the toothpick. We take a third of the mass that stays and do a flat disk that we coil on the toothpick covering the wire. We give form to the neck and the narrower waist and place the volume of the chest. We fuse the low part with the legs rubbing with a finger and a bit of water up to doing the imperceptible union. We continue working with the esteca the torso up to shaping all the forms adequately.

We take a third of the remaining mass and move her between the palms of the hands up to forming an ovoid sphere. We place the basins of the eyes with the yolks of the fingers. We are giving form with different estecas up to obtaining the wished expression. With a razor knife we open the basin of the left eye, hollow it with an esteca and introduce a small sphere of fondant white that will be the eye. Also we add a small light doughnut ring of fondant that will be the teeth giving him form with an esteca. We paint details of the eye and the mouth. We place the eyelashes with a small churrito of fondant black and finally the language with a bit of fondant red. We prepare the zone with eatable glue and place it on the neck fusing the unions carefully.

We do an ice cream of strawberry and scum covered of chocolate like it estimates in the images. With the rest of the mass we form a light doughnut ring since we did for the legs. Generating brands that mark the position of the shoulder, elbow and wrist. We divide it to the half taking one of the parts and crossing it with the wire of flowers. We perfect the form and fuse the union with the shoulder rubbing with the moistened finger. We give form to the hand and place the cone of ice cream as if it was taking it joining it with a bit of glue. For another arm we do equally but we place it in high place as if the nape was touching itself with the hand.

For the swimsuit we take fondant clear white and lilac and stretch them in thin sheets. We cut the fondant lilac in strips and place them parallel and equidistant on the white fondant. We integrate it with the roller and continue perfecting the mass a bit. We cut the forms of the swimsuit and a few strips of lilac to do the bows of the bikini. We place them on the figure and join them with eatable glue.

For the hair we mix fondant light yellow and ocher joining and stretching up to generating visible lines in the mass. We stretch a sheet and do parallel lines of pressure with an esteca of thin top. We cut the bosses of the hairdo and separate the tops. We place them on the figure sticking them with glue up to obtaining the hairdo that we wish. To end I have simulated Californian wicks roses painting the fondant with rose and the roots a bit got dark with ocher.

We finish the piece taking advantage of the rest of fondant of the swimsuit to do a beach bag with a towel and a few sunglasses. Also we give sheen to the eyes, the language, the ice cream and the ball. And we paint the white sheen in the eyes as final touch and we will have finished the figure. I hope that you like!! 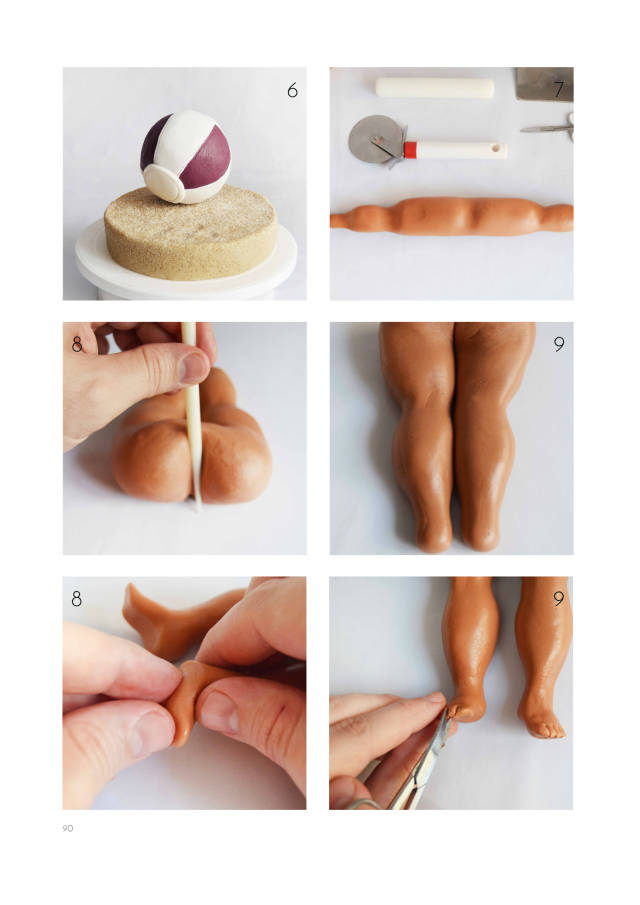 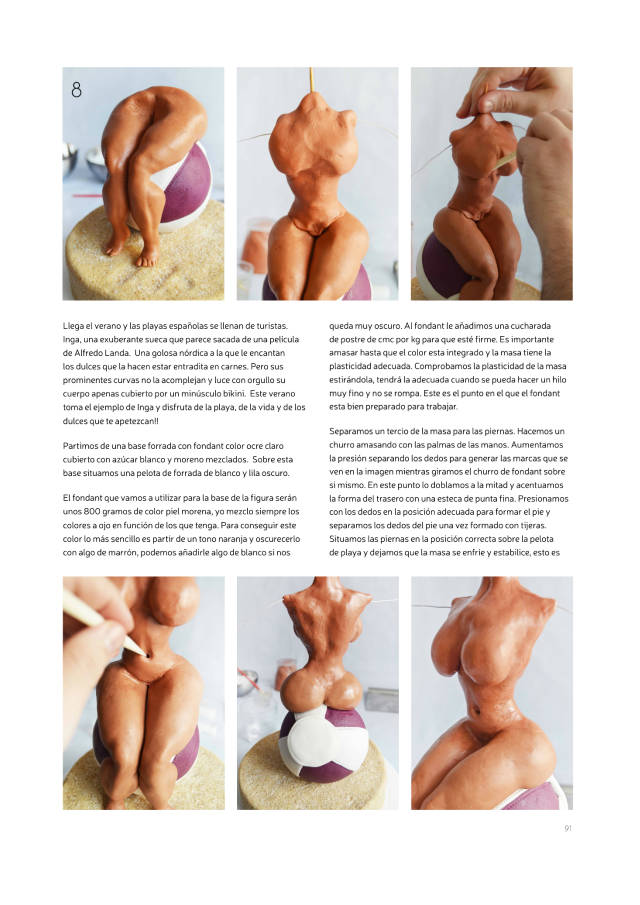 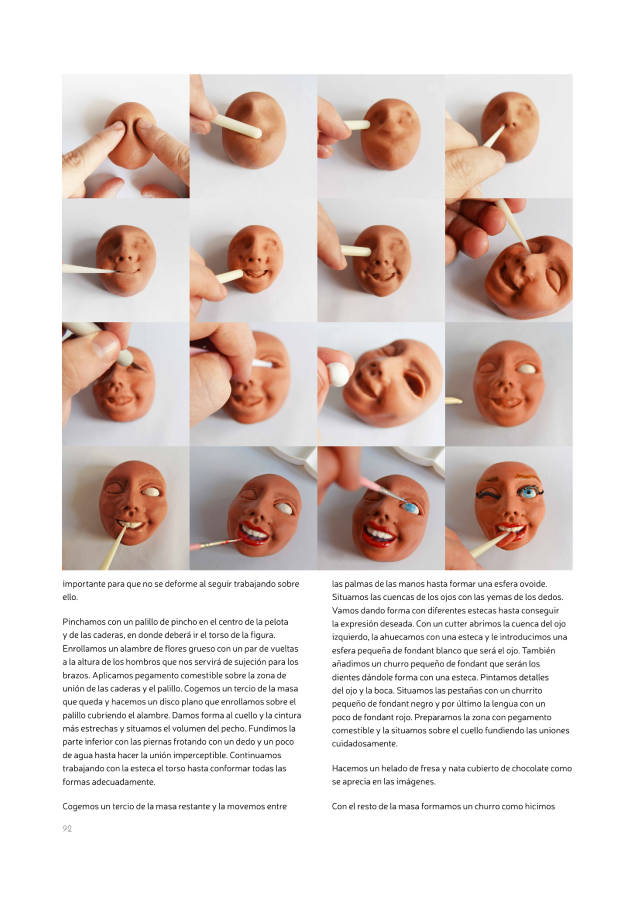 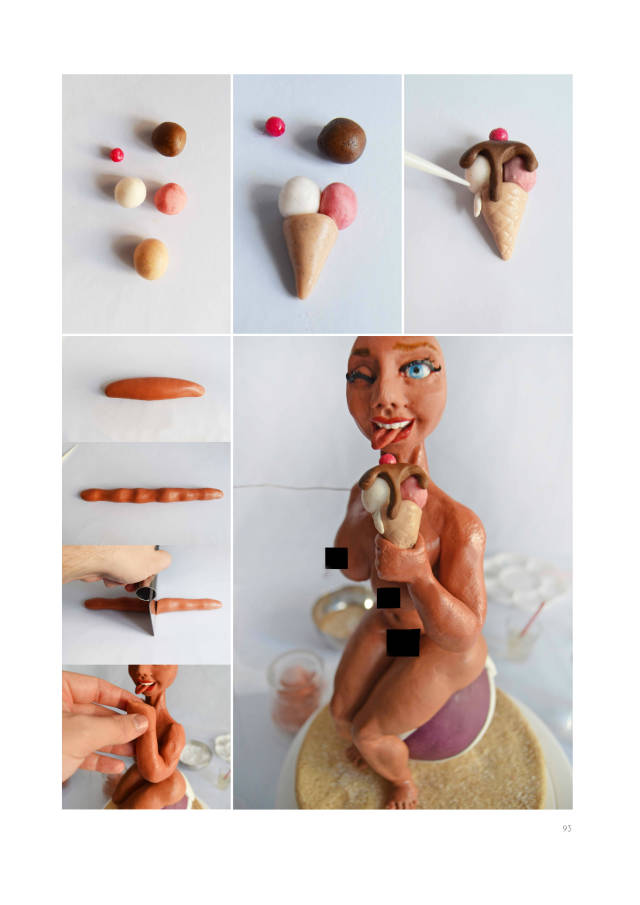 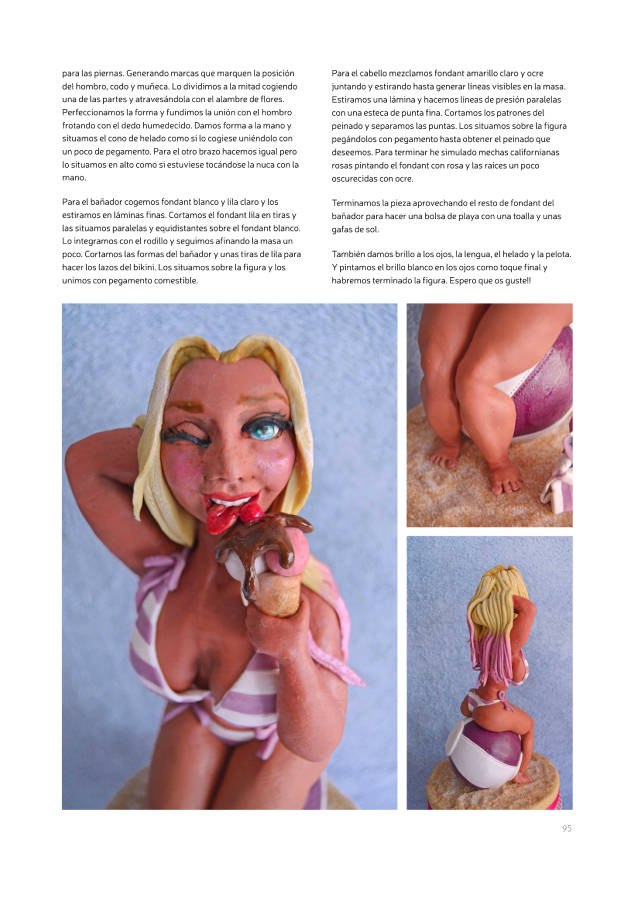 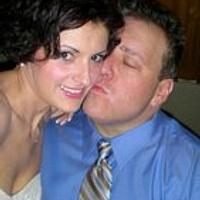 Super cool, thanks for the tutorial!!! 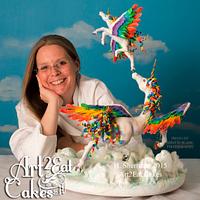 FANTASTIC!! I love her….in so many ways. Excellent work again÷ 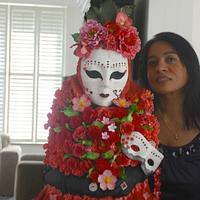 Pretty! Thank you for the tutorial x

Wow! This is incredible! Thank you so much for the amazing tutorial!

Ahhhh!!! Fantastic Daniel!!! Love the whole story you put together and great tutorial!! Right down to the modesty blocks whilst building her. So sweet 😄😄

Thank you all!! This is my first tutorial, I’m so happy if it can help someone a bit. :)

Wonderful Daniel, and fab tutorial! Thank you so much for sharing your techniques!

Thank you so much Daniel……brilliant tutorial!
Laughing at the bleeped out bits! ;-)))))