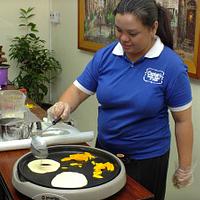 Crumbs in the Bakeroom #3: Why do eggwhites need to be strictly eggwhites in a mixture that calls for just eggwhites?

This is what I have been told and what I also tell to those who ask me.
Basically it is because of the content of eggwhites and eggyolks. Eggwhites are predominantly protein and eggyolks are predominantly fat.
We all know what we are told that if there is a speck of yolk in the eggwhite when you beat it for a meringue is that it will never reach glossy stiff peaks. I used to ask why and get told it is just because. Until I got an answer from my mentor.
When you beat protein it welcomes the air bubbles and when further beaten, it foams up and refines these bubbles. The meringue turns while because of each air molecule coated with the eggwhites stiffened by the protein.
If there is a bit of fat in it (yolk), it breaks these bubbles apart. When you beat eggwhites it is also subjecting the mixture to friction. Friction emits heat. What happens to fat when it is heated? In effect, it is like you are mixing meringue with melted butter, and that never rises.

with that explanation, how can I not follow him when he says “don’t you dare allow even a speck of yolk in the eggwhite mixture!”

View all parts of Crumbs in the Bakeroom »