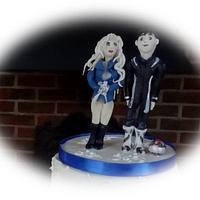 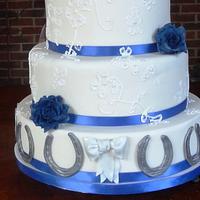 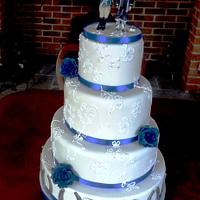 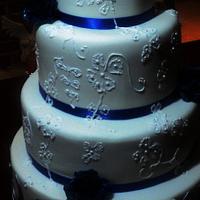 These are not perfect photographs unfortunately as the light was poor and I did not have time to mess about. I do not have decent pics of the toppers which is a shame. The first photograph was supplied to me by a guest who attended the wedding which was very kind of her. Some of you know that I was very short of time to do this on account of several projects on the go (not cake) at the moment, so this is now commonly referred to as my miracle cake! (eg.. still making the toppers the night before delivery …. which was at 7.00 am…pushed the stress boundaries a bit!).

This couple asked for a simply decorated classic style cake in keeping with the colours of the wedding theme. The bride and groom asked for toppers to be made wearing the horse riding and motor bike outfits as shown and I worked from photographs. The bride has long curly hair and wanted the topper to reflect this without a riding hat as well as holding the bouquet of blue and white flowers with a touch of red in. Although the groom is in the military he is a very keen motorcylist.

They also wanted horseshoes round all the cakes but I decided to put them on the bottom 15" dummy tier with a sugarpaste bow and made some some small blue sugarpaste roses instead. She also wanted to have the lace pattern of her wedding dress piped onto the cake. This was my first attempt at brush embroidery and I had 2 1/2 hours to do the whole cake so it was not a perfectly neat performance but she was very happy with it just the same. I had doodled the idea of blue pipework for contrast but they preferred the white on ivory. I had made the little pearls for the lace work in advance (most nights while watching tv, sitting rolling tiny little balls of sugarpaste … as you do!).

The flavours of the cake were:

All the cakes (apart from the fruit cake) were smoothed with white chocolate ganache prior to applying the fondant.

The cake travelled already stacked (the topper in a separate box) in the back of a van with the mother of the bride and had to be delivered to the venue in advance of the wedding day because I was going away (it was the Easter weekend) and so I could not assemble it onsite which I really wanted to be able to do but they were storing it in a separate place until the wedding day. It was quite nerve-wracking relying on the hotel to safely manoevre it onto the stand (it was really, really heavy even with the dummy base!) and put the topper on without damaging anything, but as you can see, they did not let us down. I had secured the toppers to a 6" cake board (also covered in fondant and lacework) but was worried about it being dropped or knocked off a table etc…. you know how it is!

Anyway, ramble over… thank you for looking! The only downer was the venue did not return the dummy cake with the horseshoes.. the bride is livid as they were going to be kept as a keepsake! I am making some more but it’s not the same.. We still don’t know what happened to it. I am guessing the hotel tried to cut it by mistake (despite my clear instructions!).
xx 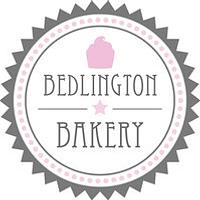 Lucy at Bedlington Bakery commented over 9 years ago

Oh my!!! I can feel the stress!!! What an amazing cake…luv the colour of the roses and brush embroidery with pearls are gorgeous! X

Gorgeous! Love your toppers and was hoping to see a closeup photo. :)
P/S: And lazy me will never roll them pearls by hand but use a bead maker. Lol!

Thank you Bedlington!! yes, stress was full on haha!! Thank you for the lovely words about the roses and the brush embroidery. Very touching and encouraging. :) xx

Pauline you make me laugh with your comments about the pearls haha! Many times my husband said that to me… ‘why don’t you just pipe them on?’ Yes, I’m nuts but I do believe they look better than piped and I always like to make the toppers (no moulds or cutters!!) otherwise I don’t feel I have actually made ‘the cake’. Silly, I know. Someone actually said ‘why don’t you buy some?’. What?? BUY cake decorations?? lol!! 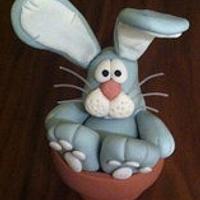 Joyliciouscakes commented over 9 years ago

You’re Amazing Fifi!! See, I could see a ‘Cake Wonder Women’ in the making…lol!! Love your figurines!! You did a awesome job despite all the last minute stress!! I’m so glad to know I’m not the only one who’s stress with cakes sometimes… lol!! xoxo 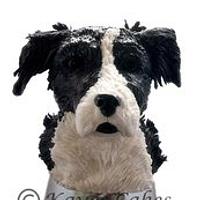 Kaye commented over 9 years ago

You never cease to amaze me Fiona! What a totally incredible cake, just love it. Your story about its construction made me laugh as I could imagine just what you were going through…felt the pain and exhilaration when its done. I think you should always wear a wonder woman outfit everytime you make cakes from now on lol xx

ooh another wonder woman comment lol!! thank you Joy and so glad you like the figurines. I am reliving the anxiety just thinking about it! thankfully it all ended happily :) Yes, we all go through the cake stress, no doubt about that. Even my 6 year old granddaughter gets stressed over her cupcakes! lol!!

Thank you so much Joy and Kaye. Big hugs xx

Goreti commented over 9 years ago

I have to give all of you lots of credit. Don’t think I could ever even attempt a wedding cake. Way too stressful. The cake is beautiful. 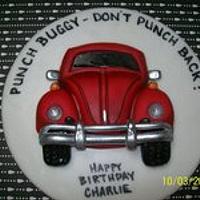 Chris Jones commented over 9 years ago

I was stressed just reading about it! and just kept thinking ‘yep, that’s one I would have had to turn down the order, I do believe!’ It turned out gorgeous and super job on the brushed embroidery (something I’ve yet to attempt on a wedding cake!). I also totally agree with you… I don’t purchase ‘ready made’ decorations either; I’m convinced that the art of truly ‘hand-made’ cakes will one day be a thing of the past…I shudder to think!!!

aw Goreti and Cakesby Chris. thank you both and I love your comments haha!! I think we should experience a wedding cake at least once in our lives. It’s quite, quite different to any other I find. thank you so much Goreti and Chris. You know, the day before it was due to be delivered there was someone in my kitchen while I was making the royal icing who could see what hadn’t been done yet and did not believe it would be done and it was at that moment, for the first time in my cakey life, I thought I would have to call in help!! Perishable thought!! But it just goes to show.. where there’s a will there’s a way….

You are all such awesome cake decorators, thank you so very much for your encouragement. Hugs! xx

What a unique and amazing cake! Love your topper!