Presentation
I admit that I had a very hard time when I had to choose a topic that is related to “I Love 80’s” for my Cake Collaboration, which I got involved with the invitation of the beloved 5İZ Group. The reason for that is, my childhood and puberty, were in the 80’s. In other words, the 80’s were the period that that shaped my destiny, and determined my personality. Therefore, when I was told about 80’s, I had to think too much, and had to dig through my memories.
Throughout these memories, the cartoon series “Candy Candy” shined out, and became the main focus to my design. This cartoon which was broadcasting on tv, was written by Kyoko Mizuki, alongside the drawings of Yumiko Igarashi. It is about a story of a mischievous girl named Candy (Candice) who had curly blonde hair and wide green eyes. Candy grew up in the orphanage of Mrs. Pony, and later was adopted by Audrey family. In my work, I tried to reflect Candy, and her two big crushes Antony and Terry, with her cute friend Clint (the racoon), in my own style.
Design
In my work, I made the figures of Candy and Clint with wire skeleton method. In the background, I illustrated the orphanage of Mrs. Pony, big plane tree, and Candy who thinks about both Antony and Terry. On the ground, I illustrated and painted roses with the style of the illustrator Yumiko Igarashi. Also, I glamourized my work with the three-dimensional roses made with candy, in the same way. 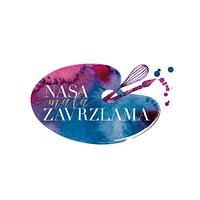 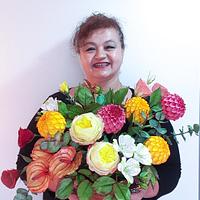 Thank you @CakeHeaven by Marlene; @NasaMalaZavrzlama; @MsGF and @The Garden Baker… I’m so happy to see your beautiful comments. <3

@Benny’s Cakes thanks alot to you too :D

@Goreti thank you so much <3