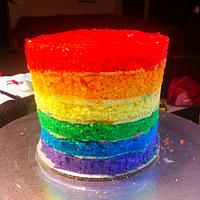 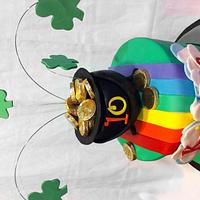 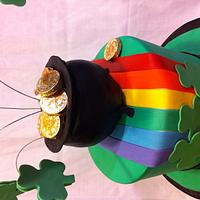 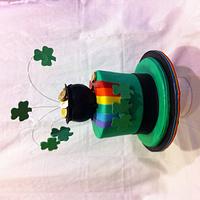 How much fun would it be to have your birthday on St Patrick’s day?! Well this cake was for a lucky girl who also happened to get a birthday cake from me exactly one year earlier — the first day I was officially in business as Jenny’s Haute Cakes! So making it was also an anniversary celebration for me! Inside are 6 rainbow layers of white cake filled and frosted with white chocolate ganache. Covered in fondant. The pot of gold is basically a large cake pop covered in ganache and fondant and filled with chocolate coins. The shamrocks flying around the pot of gold were cut from gum paste and “glued” back to back around a cake wire made by Duff Goldman. The tall one are cake wires and the short ones are on cupcake wires. Nothing about this cake was particularly difficult to make, but I thought the design came out really well and it is fun!

Goreti commented over 9 years ago

Michal Bulla commented over 9 years ago