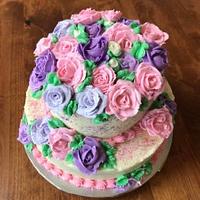 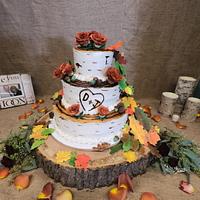 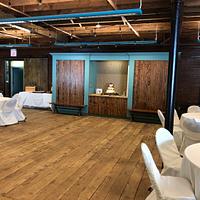 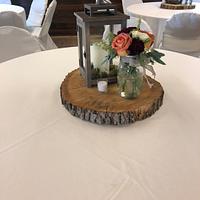 My brother and new sister-in-law recently asked me to make their wedding cake, which was to be a fall themed wedding in an historic barn where they live. I’m a self-taught amateur cake decorator and although I’ve been making buttercream cakes for a while, I have never attempted anything so complex before. I’ve never even worked with gumpaste! But I rose to the challenge, and not only learned how to create gumpaste leaves, roses and dahlias (the dahlias ultimately were not used as it was to match the wedding flowers and they were unable to get them and substituted at the last minute), but I even watched a few other YouTube videos and learned how to make a birch tree log effect as well. I’m not one to brag, but I really think I nailed it!!!

I even added some personal symbolism into the cake, such as the middle tier having 5 rings in the log, representing my brother’s first wife who passed away 4 years ago, and 5 acorns representing the 5 children of this newly formed family, that my brother and his wife will now raise together.

It was a beautiful wedding and venue and the cake fit in so perfectly. It was literally the icing on the cake for a wonderful day!!!