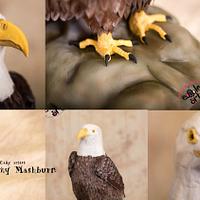 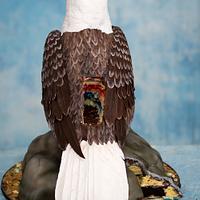 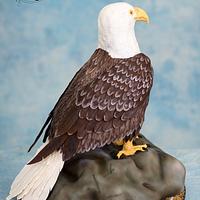 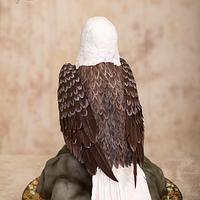 This is my piece for the World Animal Day 2016 collaboration hosted by the super talented Sharon Spradley. This was my first collab and I was super excited to be asked. We had to do an animal from our native country. My country being the United States I thought there would be nothing more fitting than the American Bald Eagle. I chose this not just because of the obvious reason but also in part due to my Native American heritage and the other part due to it’s amazing climb from being almost extinct to thriving. I encourage you to go over to the collaboration and check out all of the amazing cakes that were done for this collab.

My cake body was covered in chocolate as the under layer. The feathers were made with a mixture of gumpaste, modeling chocolate, and fondant. Each feather was painstakingly cut veined and dusted by hand using a leaf cutter and vein mold. The head and feet were done using modeling chocolate and covered in fondant and the eyes where made using isomalt and an edible image. The cake was dusted and airbrushed for color and depth. 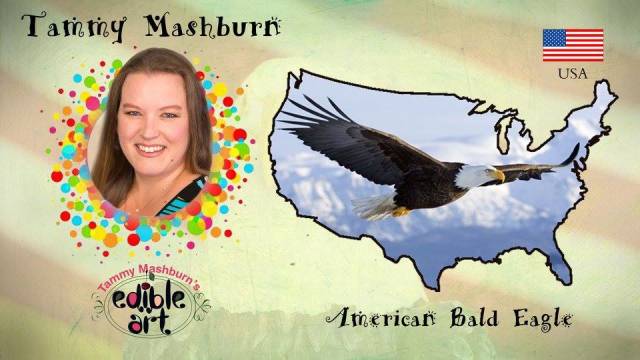 You did a fantastic job!

Simply fantastic and real cake to boot, gotta love that! Well done honey you are brilliant! 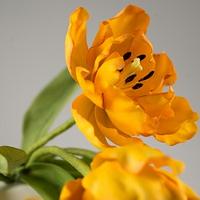 Tammy, you did such a fantastic piece. Congratulations and on your first collaboration :)

Wow, Tammy, totally nailed the regal eagle!! Stunning sculpting and colouration. Pinned to our board
https://uk.pinterest.com/CalliciousC/world-animal-day-2016/ 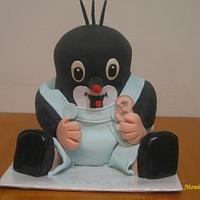 Thank you everyone for the kind words. It was super exciting to be a part of this collab.