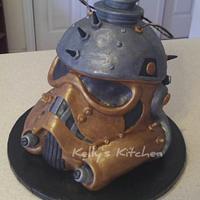 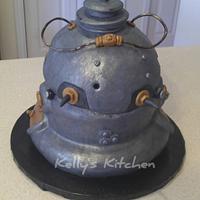 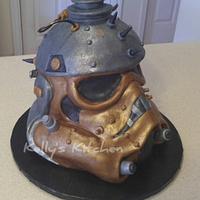 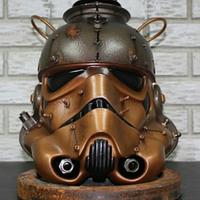 My boyfriend is a huge Star Wars fan and also likes steampunk. I don’t recall just how I came across this steampunk storm trooper helmet online (last image) but when I saw it, I knew it’s what I wanted to try & make for his birthday cake.

I found a few picture tutorials online for storm trooper helmet cakes that I used as guides. He started out as two eight inch cakes with three six inch ones stacked on top. After leveling the cakes I mixed the scraps with buttercream & used the mixture to build the shape of the helmet. I then covered it with chocolate ganache before covering in fondant. The cake is vanilla bean cake with chocolate buttercream.

This was my first time painting an entire cake with luster dust & was very happy that the brush strokes aren’t visible. The texture on top of the helmet was achieved with a leather impression mat. All of the details on the helmet were created with fondant except for the “wires” on top which are black shoestring licorice.

It’s my new favorite cake that I have done to date. I usually just look at my cakes & see all the flaws but when I was done this one I stood back & said “that is F#$@! awesome!” Lol. I only wish I had a nice back drop to photograph him. It’s something on my cake wish list!

The best part is that I managed to totally surprise him with it which was awesome! Several of his friends didn’t believe it was a cake until it was cut. I found that to be a huge compliment :-)

Sorry for rambling on this one but just so happy with end result. Hope you all like him as much as we did.

MsGF commented over 7 years ago

CuriAUSSIEty Cakes commented over 7 years ago

Amazing job Kelly I totally love it. Will make this the cake I share on Fb today! 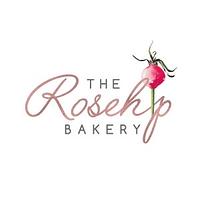 The Rosehip Bakery commented over 7 years ago 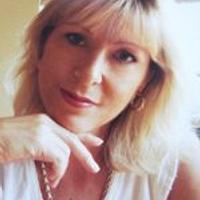 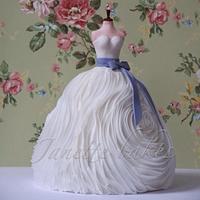 Janette Bakes commented over 7 years ago 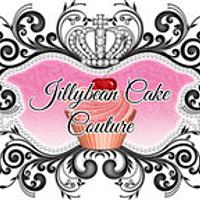 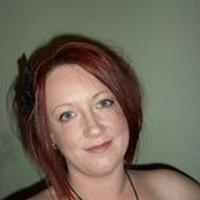 clairessweets commented over 7 years ago

Kelly Stevens commented over 7 years ago

Thank you all for the compliments! It means a lot coming from all you very talented artists :-)

Thanks for the share on your fb page, Sharon. I appreciate it!