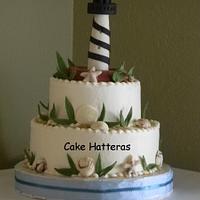 A year ago, I made a wedding cake covered in gum paste, Star Gazer Lillies. (they were purchased, I did not know how to make them) The anniversary tier was packed away in the freezer when Hurricane Irene hit Hatteras Island, it knocked the power out for days and the anniversary tier was ruined. The mother in law requested I make a small cake for the couple for their anniversary. I copied the original cake order slip and copied the original cake. At the time, I did not know how to make gum paste flowers. This was my first gum paste flower and I made it for the bride celebrating the anniversary.

The bride is an aquatint of mine and last week we had dinner out with a big group of friends. She pulled me aside and asked if I could make a cake for her this weekend for her anniversary. I felt terrible when I told her I was slammed with cake orders. I could see her spirits drop. I felt so bad fibbing to her but I knew she would get an awesome cake!

Psalm 127:1 Unless the LORD builds the house, the builders labor in vain.