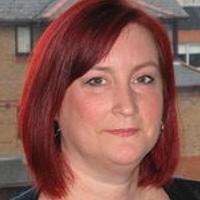 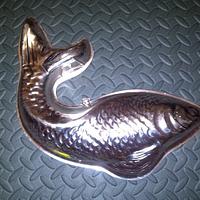 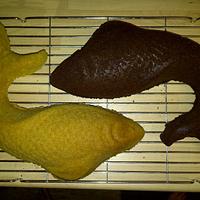 I made this for a friend who likes to fish. I was going to make a simple round cake and decorate it with a fish head and tail rising from the cake which had been decorated to look like a pond with reeds and rocks. On my way home from town to start on this masterpiece, I wandered into one of the charity shops and spotted a fish-shaped tin – the kind you use for jelly or salmon mousse – and at a bargain of £1, had to have it!

The tail end was quite thin so I covered that in foil to stop it from cooking too quickly and drying out before the rest of the cake was ready. I baked one vanilla and one chocolate for variety.

Of course, at this point, I realised I hadn’t given any consideration whatsoever to some kind of cakeboard and the two cakes together wouldn’t fit on anything I already had to hand. After a bit of panic, I picked up a tea tray which which just happened to fit the two cakes. It wasn’t at all attractive though. I found a cardboard box and cut it to fit the tray, covered it in tinfoil and then mixed several shades of blue fondant and marbled them together and covered the foiled board to look like water. Both fish were covered in a thin coat of buttercream and then fondant. I used a plastic tool to mark the scales and blossom dust to give colour accents where I thought it was needed. Thinned down gel paste colour was used to paint in finer detail. I painted everything with a wash of glycerine to give it a wet look. Unfortunately this made everything quite sticky but no less edible. I’ve since discovered confectioner’s varnish should I feel the urge to make anything shiny in future. 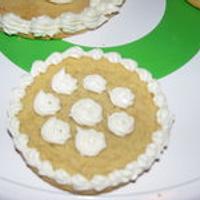 that is a really cool idea, ‘water’ and all.

Thank you, the water ended up that way more by happy blind luck than design – actually, lots of my cakes owe more to happy blind luck. Now, if only I could apply that to lottery tickets…