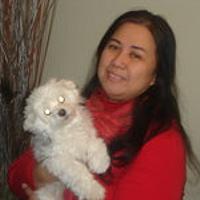 This cake consists of 2 cakes. One is the rectangular red velvet cake with cream cheese buttercream covered in a very pale blue marshmallow fondant. The small (6-inch 2-layer) round chocolate cake with vanilla buttercream is covered in mauve and olive green. This cake depicts two minions (one-eyed and two-eyed) from Despicable Me. The one-eyed minion is protruding from the round cake about to grab the cupcake made of fondant while the two-eyed minion waits below. The idea on the one-eyed minion was inspired by bake-a-boo site, but I added my own personal spin on it by making the minion coming out of the cake and reaching for a cupcake and not a stacked cake. :)