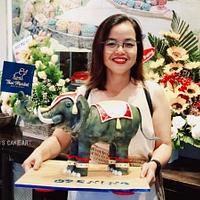 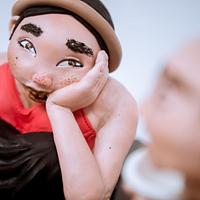 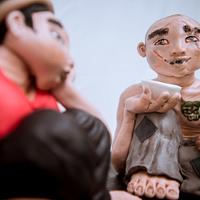 Sugarart is famous in Western. It’s is a great art that artist can get very creative. If everyone see sugarart in a view of Western people, I look it through my eyes – a Vietnamese and through my country’s colorful culture. Fairy tales, numerous historical characters, literary works… are amazing things I want to bring into my Sugarart work.
In this first work, I want to introduce a character called “Chi Pheo” or Chi – a poor farmer, a victims of harsh feudalism in the same name – short story of Nam Cao author. Chi Pheo is famous in Vietnamese literature. It is also the most favorite lesson of mine in high school.
In the literary work of Nam Cao, Chi Pheo is a “devil” of Vu Dai village. But there is a long story with adversity and jostle in life of this character. When he was born, he was abandoned in an old brick kiln. A widowed woman took him to her home and nurtured him. When grow up, Chi Pheo became a lenient and hardworking farmer. Then, Ba Kien – a cunning landlord in Vu Dai village, hired Chi Pheo to work in his farm. After a long time, Ba Kien’s forth wife fell for Chi Pheo and this made Ba Kien jealous. So, he decided to put Chi Pheo in prison. The life in prison made Chi Pheo from a honest farmer to degenerate man with crisscrossing scars and tattoos in his body and hatred in his mind. After being released from prison, he always immersed in yeast and cursed everytime he drunk.
An other character in the story of Nam Cao in my work is Thi No. She was so ugly and stupid that would stop a clock. Nam Cao described that Thi’s face was terrible that no word can express. Her nose was both short, big, red and scabrous as orange peel. Not only that, eating betal made her two thick lips were red and thicker. Her teeth was too big and stuck out. What an ugly girl!
However, Thi No appeared as a flash light in the darkness of Chi’s life. Once, when Chi drunk and got a cold near river bank, Thi No caught Chi and took him to her tent. She cooked scallions porrigde for him and looked after until Chi recuperate. The care of Thi No made Chi Pheo think about his dark and meaningless lifetime before. His mind immediatedly had thought to make a new life and dreamed of a happy family with Thi.
After the appearance of Thi No, reader think that Chi had seemed to find the path of honesty. But Thi No’s aunt countered the love between Thi No and Chi Pheo, she thought Chi was a devil and discreditable with her niece. The dream of a new life as a happy family in Chi’s mind had broken!
No one can help Chi! His life was hopeless. Desperately, he decided to kill Ba Kien – the devil ruined his life and then killed himself.
Follow my fanpage: https://www.facebook.com/hangcakeart/
Follow my personal facebook: https://www.facebook.com/hang.huynh.332