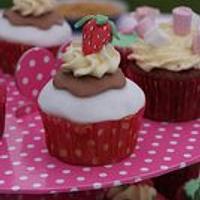 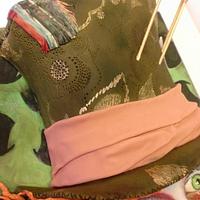 Two chocolate cakes sculpted into a top at and face, covered in fondant icing and painted. The eyeballs and teeth were all made and placed into recesses to give a more realistic look, the tophat was indented and painted to give an embroidered look to the fabric.
This is one of my favourite themes…..give me an Alice cake and I could spend hours on it. This one took 32 hours to be exact…..he did have candy floss hair to begin with. I patted myself on the back for a job well done and my own genius idea as it looked awesome. Until I came back to it an hour later and obviously the atmosphere had got to it…..an absolute soggy mass of sugar and crystals (delightful!)
So removed it all and made his hair from icing instead, my kids said they looked like carrots or niknak crisps but the lady was very pleased with her 30th birthday cake and her hubby had made a stand which held it in an upright position so no-one could miss him at the party! 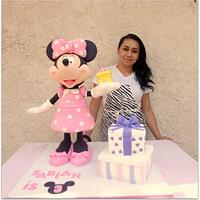 Laura Barajas commented over 10 years ago 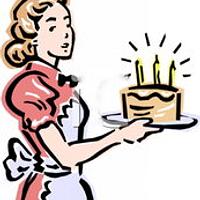 SarahBeth3 commented over 10 years ago

Wow! Lots of talent showing in this one! I could NEVER make a cake like this look anywhere near as good as you have! His mouth especially looks realistic. I think his hair looks good. ;)

Nicola Shipley commented over 10 years ago

Thanks guys, he was definitely a labour of love……I didn’t mind that he took so long as I enjoyed every minute of it. Although forever and a day I will look at him and kick myself for the mistakes and the fact that he doesn’t look like johnny depp!!