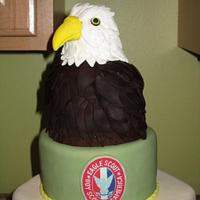 I made this picture of Jerry with black Cake Lace. It seems must easier than royal icing although I haven’t done that in a 100 years. I got a tutorial from Jenny’s Haute Cakes & decided to try it. Piping actually worked best & then I filled it in & spread it with a paint brush. My brother got a kick out of it. I taped wax paper over the image found on line and copied it. I made an extra one which I’m sending to a faraway Dead Head friend. And of course I had to write part of a song “What a long strange trip it’s been”, after consulting with my Dead Head friend.

MsGF commented about 6 years ago

Jazz commented about 6 years ago